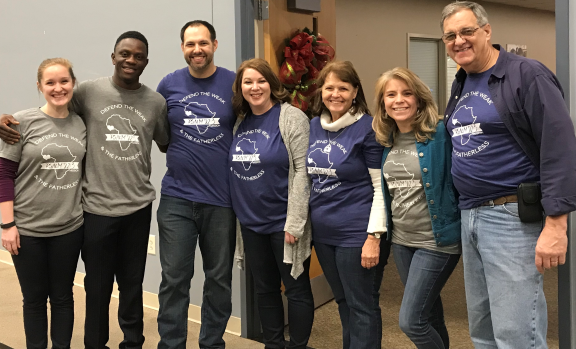 At the beginning of 2017, the Psalm 82:3 Mission board believed it was time for us to host our first banquet. We had no idea the journey we would take to get to it, but we began planning. An amazing team was put in place, and ideas started flowing. We set a purpose, a place, and a theme. We set a date in September.  We even had a wonderful donor cover the cost of the catered meal for 200 guests. A couple months later we came to a crossroad for the ministry and we prayed. We put our trust in God and He gave us a straight path. Instead of hosting our first banquet in September a team was sent to Liberia to figure out which direction God wanted the ministry to go. When the team returned a banquet was one of the first things on our must do lists! The funds were already available for the meal, and the location was free for us to use. We set a new date of December 9th, and dreamed together toward it..

For the next couple months we tried to balance our new, way bigger than us, calling as a small volunteer based organization while also planning a banquet. While we told the story about what God was preparing in Buchanan we were reaching out to all of our contacts that might know a thing or two about pulling off a banquet in 2 months. Amy Crump and Marlee Mirre took the lead and surrounded themselves with a behind the scenes team. Macy Crump even jumped in with 10 of her Chic Fil A Leadership friends to help the day of. Matt Lee arranged for Morris Freeman to come to America for the first time, and took care of getting vision packets put together. Other team members did everything they could to get their group of friends and family to the banquet. Together the team reached out, shared facebook videos, and invited anyone interested to attend.

What we had already seen God doing gave us the courage to know that this event would be an amazing beginning! Replies for attenders began to build the excitement and everything worked out perfectly at NorthEast Christian Church for our small team. Morris arrived from Liberia safely and reached out to all of his old team members that had journeyed to Liberia. While he worked hard on a very challenging speech, he also spent several evenings practicing with Jeff and Mahari Crump and Onah and Marie Lee on several Liberian songs. At the final count going into the week of the banquet we were very close to 200 guests on the reservation list.

Then the forecast for snow and ice in Lexington came, but most people still planned to attend. Blue Grass Christian Camp opened a few rooms at a low cost for out of town guests. The room was set up and decorated. Silent auction items were ready. Christie Lee from Feather Refuge helped with promotional materials, and Jim Walters from Positively Java provided hot coffee for the evening. As the time drew closer though calls and text messages from all around began to become cancellations. Due to the weather and sickness many young families brought their children along with them. While several guests had to choose to stay home, several others persisted to be part of this special night.

The food provided by Carabbas was delicious while the Silent Auction took place. Most of the items were from Liberia, but 2 bonus contributions came in from Nick and Ciji Lukins. Near the silent auction was a suggested donation table of bracelets and necklaces. Across the room were experiential tables designed and put together by Amy and Marlee along with special help from Amy’s brother Tim Smith. At these tables you could see typical Liberia toys, a photo book, normal clothing, discover the vision of the Buchanan Project, and even listen to Pastor Eric speak.

When we knew that all of our guests had made it safely we began the program. Morris gave his speech. Through his words the audience could feel the love and pain he feels for his people in Liberia. He shared about the reality for the Liberian people and why what God was going to do was needed. Then, he brought his buddies, that once called Liberia home, to the stage for a couple songs and dancing. He encouraged the kids to have fun on the stage and we even witnessed some backflips and cartwheels. The mood changed from heartbreak to heart warmth. Matt closed the evening with a challenge for us all to join together and put our trust in God for what lies ahead. Then we closed our time together in prayer and gave those in attendance a few moments to make commitments. While we waited though we played a couple special videos, and Morris led some worship with Terah Lee. Nearly all of the kids in the audience ended up on stage and together we laughed and were filled with joy.

It was indeed a special night, and our team was humbled by all those who joined with us both in person and in Spirit. We feel like those connected and interested in being part of something much bigger than ourselves grew exponentially!

The totals for the night secured the thought that the night was an amazing beginning! By the end of the night the suggested donation table had received $341, and the Silent Auction had brought in $1,549! The donations given that evening totaled $17,285, along with committed funds to come of $13,150.00. The total for our first banquet was $33,325.00!!! Since that night more funds and commitments have continued to come in which is paving the way for a huge difference in Buchanan, Liberia in 2018!

We praise God for the hearts of the people involved. We applaud those who braved the elements to join us that evening. We rejoice at those who have made commitments and donations. Each day we receive notes of encouragement from those planning to join with us for this journey. We welcome you!

We are at the beginning of something very special in Buchanan, Liberia. This project, that God is allowing us to join Him in, is going to change the lives of orphan children, special needs children, elderly folks, and families for His glory!

If you haven’t joined the journey financially it is never too late. The end of 2017 is coming soon though and your gifts are very important! You can donate online at psalm823.org. You can send a check for a one time gift or monthly donation to Psalm 82:3 Mission, PO Box 23259, Lexington, KY 40523. You can join as a prayer warrior, or you might even feel led to join us on an upcoming mission trip! After Christmas we will tell you how you can do that.

Just by reading this blog you are following the journey. It is up to you if you take the next step of faith and get involved. We hope you do.

Merry Christmas from our team to your home!